The MUGEN brand is synonymous with extracting unlimited performance and style from the Honda range of cars, thanks to its extensive portfolio of ultra high quality upgrade components, both large and small.And one of the most accessible ways of getting a touch of that MUGEN magic has just been launched for the Honda Civic Type R FN2, in the form of MUGEN alloy oil filler cap.

Specifically designed for the Civic Type R’s K20A I-VTEC engine, the MUGEN oil filler cap is machined from a single piece of billet aluminium, which is then hard ‘allumite’ finished in a choice of colours including blue, black, gold, red and silver. During the winter of 2007 M-TEC Company Limited of Japan announced a new initiative – the formation of MUGEN Euro Company Limited in the UK and the establishment of a MUGEN-POWER racing and high performance engine facility in Northampton in the UK’s ‘Motorsports Valley’ by July of that year.

After a little more than four years from the ground-up start, MUGEN EURO has supplied approaching 400 competition engines. In addition, we have: 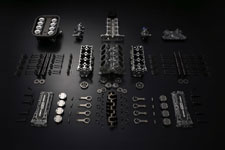